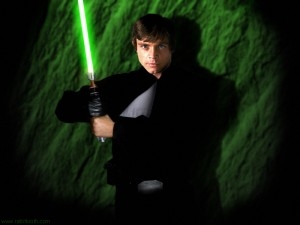 So what on Planet Alderaan does Star Wars have to do with presentations?

Let me explain.  Star Wars follows a quintessential three-act structure.  In fact, not just Star Wars, but many movies, plays, and books progress this way.  So too should your next presentation.  Why?  Because a three-act structure provides an organized and engaging way to tell a story.  And a presentation is, after all, a story.

What is a three-act structure?

In a three-act structure, a story unfolds with a clear beginning (Act I), middle (Act II), and end (Act III).  While the acts are distinct, Act I builds into Act II, and Act II into Act III.   Furthermore, between each act is a turning point.  Turning points provide closure for an act and transition the audience to the next one.

Scenes in Act I orient the audience to the setting, the protagonist, and a disruption.  (A story wouldn’t be interesting if there weren’t a disruption to produce drama.)  These three components create what is called the beginning equilibrium.  Once the beginning equilibrium is established, Act I finishes with a turning point, which is usually a decision, or change, made by the protagonist.

Act II is where the rubber meets the road (or where the audience experiences the main events).  Act II uses multiple scenes to describe how the protagonist grows and how the plot thickens to ultimately build to a conclusion.  This act also ends with a turning point that leads the audience to Act III, the big finish.

How does the three-act structure apply to Star Wars and presentations?

In Star Wars, Luke is clearly the protagonist, and the movie opens with scenes related to his life on his home planet, Tatooine.  The disruption occurs when Luke one day returns home to find his family murdered and his farm burned to the ground.

For a presentation, the setting, protagonist, and disruption work similarly.  A business presentation may open with the current state of the business (setting), a decision that the audience (protagonist) needs to make, for example, regarding the development of a new product, and the threat from competitors if the business doesn’t expand its product line (disruption).

Remember, this first act in the presentation creates the beginning equilibrium.  The goal of the remaining acts is to bring the audience to a new, positive ending equilibrium.

But let’s not get ahead of ourselves.

The turning point from Act I to Act II in Star Wars is Luke making a decision to leave his home planet to follow Obi-wan Kenobi and fight for the rebellion.  Luke, in Act II, meets Han Solo, studies the ways of the Force, and saves Princess Leia.  The act ends when Luke and his cohorts escape from the Death Star.

The turning point for the audience in the business presentation is knowing that they have to make a choice on whether to proceed with the new product.  Act II provides the information or justification to allow the audience to make an informed decision.  In the act the audience may learn the overview of the product development plan, marketing plan, and initial sales projections.

Finally we come to Act III, the climax.

In Act III, the threat of annihilation from the Death Star, the Imperial superweapon, still exists.  Therefore, with a squadron of fighters, Luke returns to battle and faces the Death Star once and for all.  Aided by his newly acquired Jedi powers and use of the Force, Luke destroys the Death Star and ends a key chapter for the rebellion. A new ending equilibrium is thus created.

The turning point to Act III is to revisit the disruption—the threat from competitors—and to summarize the key points that make the case for the new product.  To help the audience make the decision, the role of the presenter, or storyteller, is to describe the new business equilibrium using both reason and emotion.  The presenter ties up the presentation with a dramatic ending describing the benefits of developing the new product and its impact on the future state of the business.

If you’re successful in using this three-act structure, as Star Wars was, you will be successful in creating an organized, engaging, and persuasive presentation.  You may not be talking about lightsabers and Death Stars, but you will tell a compelling story all the same.

How Product Managers Lead Through Communication

Jazz up Your Next Presentation

Miles Davis’s album, Kind of Blue, is regarded as one of the most influential…

Clustering: Good for all Occasions

By Barry Mohn Occum’s Razor, loosely interpreted, is a principle stating that the simplest method…